A moment of silence for James Kim please.  I was reminded of him more than once today.  The original story was that he was directed to take a road by his navigation software that got his vehicle stuck in the snow.  He died trying to walk out for help while his family stayed behind.
http://en.m.wikipedia.org/wiki/James_Kim

You’ll understand why I thought of him as you read on.

Now, on to today’s ride blog.

One of the best things about riding solo is that you’re not constantly wondering if you’ll be left behind by the group.  Waking up for day two of my ride was one of the most relaxed times I’ve ever had packing up camp and starting the ride.  I didn’t get started until 10am. 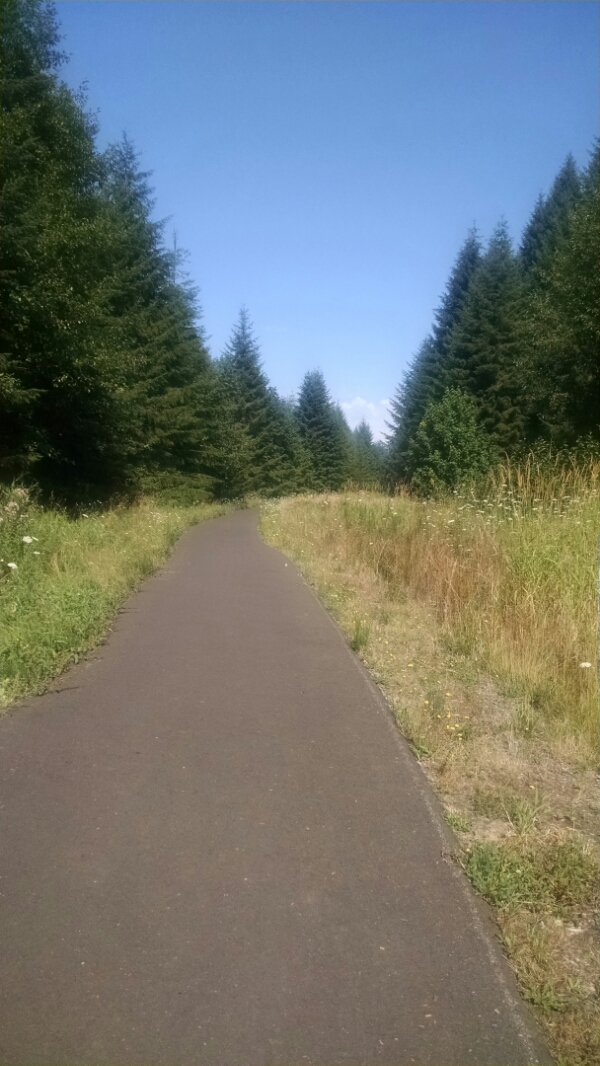 The first 11 miles into Vernonia were filled with scenic views like this one above. And I enjoyed one of the apples pictured below that were hanging over the path. Sure it was small and not completely ripe. But things always taste better after a few miles on the bike. 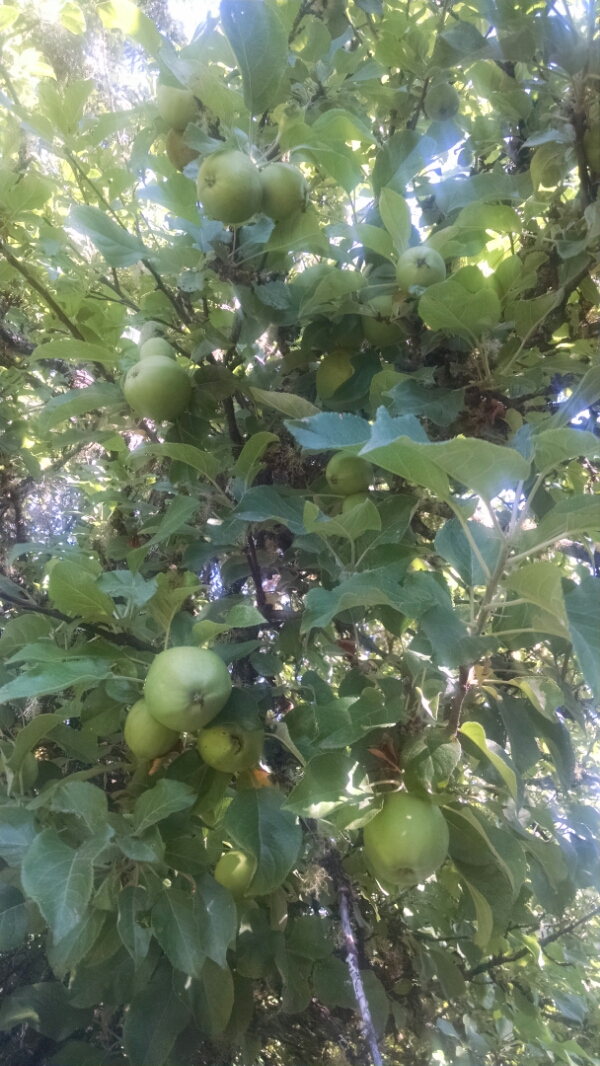 Its interesting that I ran into the Corbet parade on my bike ride on the 4th of July, and today I rode up to the Vernonia parade. There was a car show, tractors, logging trucks, and of course clowns. 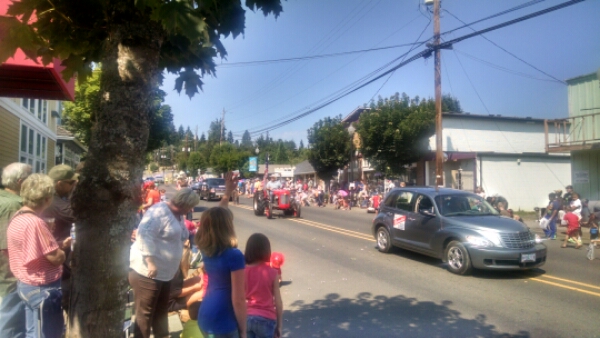 The woman at the Blue House Cafe commented about how they didn’t have grilled food when I asked if the burger came with fries. She said, “this aint like an American burger. It’s huge, and you will be totally satisfied. No need for fries too.”. Well, while the food was definitely fantastic, I must say that I left still hungry. That’s happened two days now where I’m continuously hungry no matter how many times I eat. 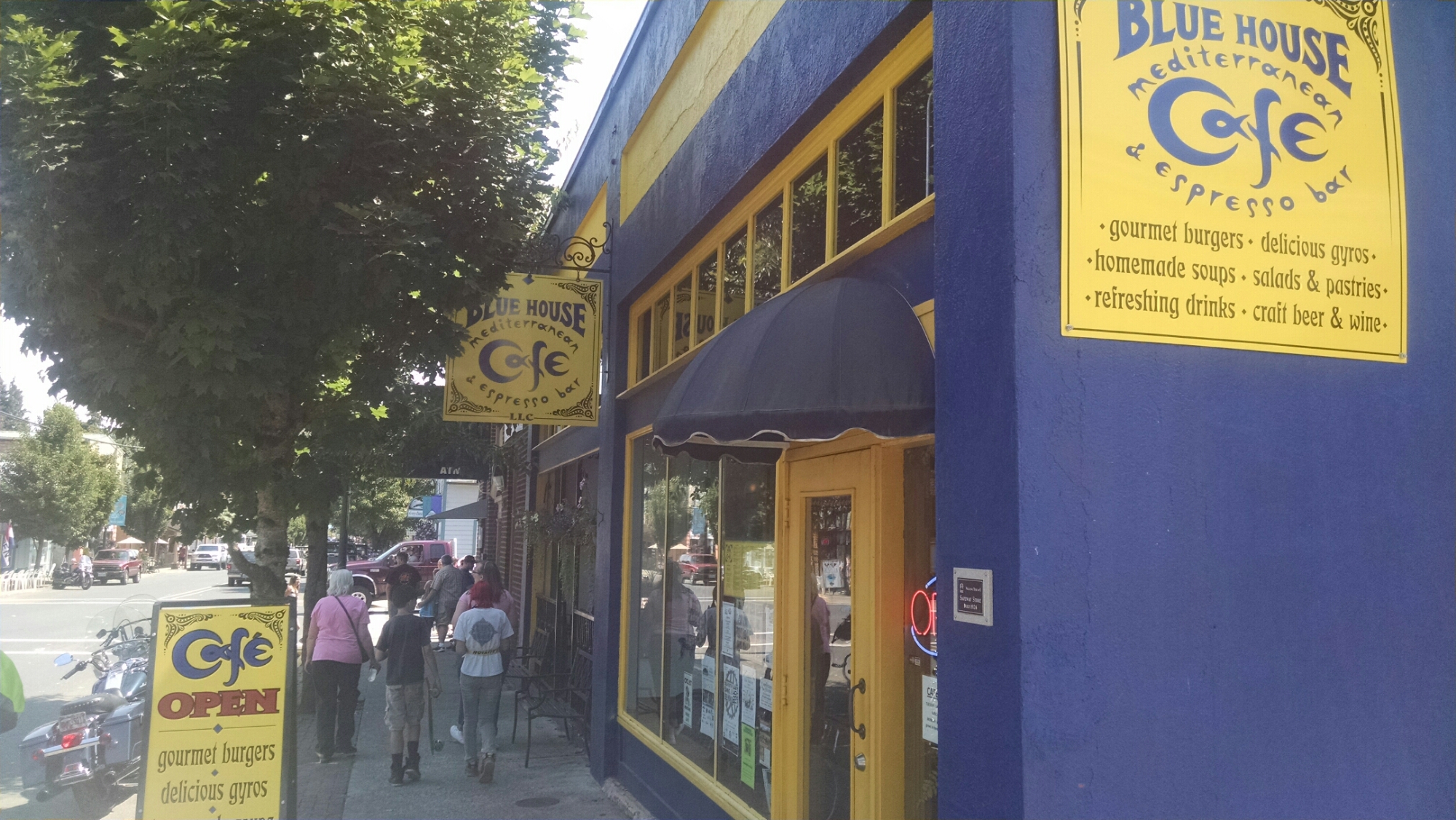 About a half mile past Vernonia, my google navigator steered me down a gravel road where I quickly came to a closed gate. There only signs posted was one prohibiting motor vehicles during certain hours, but from what I could tell, the gate should have been open at this time. 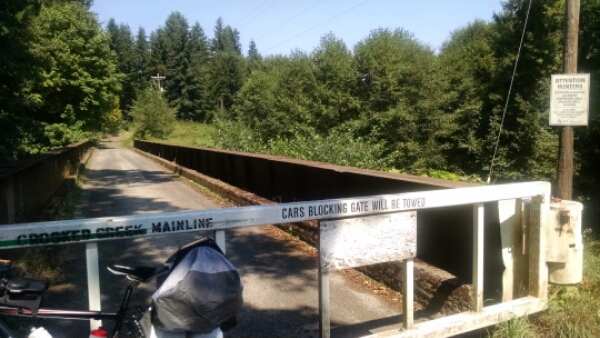 After a little contemplation, and checking the map, it seemed to me that I should follow googles direction and jump the fence. This side road seemed to parallel the highway to some extent anyway, and I thought it would be a nice diversion. So I unloaded my bike and lifted it over the gate. 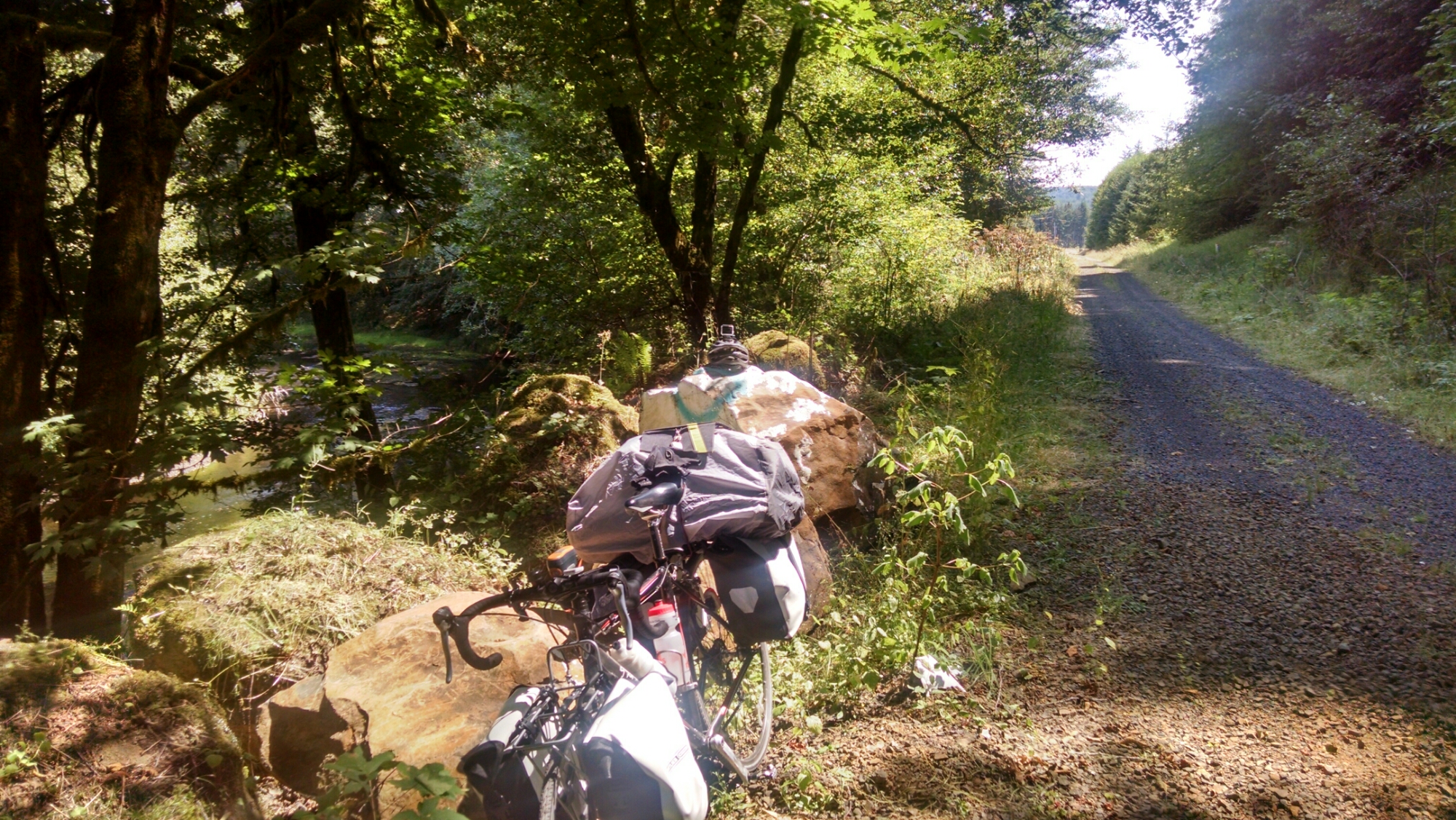 According to the navigator, I had about 4.5 miles on this back road. And it was absolutely awesome. I’m so glad that I decided to jump the gate. The shot above was of a nice secluded break from the ride. Of course I had to circumvent a second gate when I reached the other side.

Once safely back on the pavement, I realized I was getting low on water, and was starting to look for some place to fill up. Unfortunately it wasn’t too long before I started climbing a serious hill (1,300 elevation). It was pretty hot, and there was nowhere to stop to refill. The only reason I had any water left at the top was because I was purposely conserving it. I was so thirsty at what I thought was the top, that I finished my last swallow. 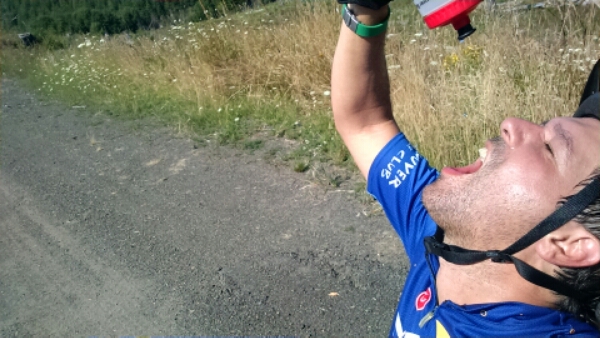 I was looking at the navigator that indicated a left turn in about 3 to 4 miles. I was hoping that would be a turn into a service area with water. But much to my dismay, it was a turn onto another gravel road. Google was suggesting a shorter path to reach my destination (the ferry). It was overall a couple miles shorter. Man I was so thirsty. The heat and the ride really dried me up. I was thinking if I could shave a couple miles off, maybe I would get water that much quicker. And as I looked up the gravel road, I noticed a gate that was actually “open”. We that settles it for me. It was an open gate. Totally taking the shortest path.

As I turn onto another gravel road, the navigator chimes in that I should stay on this gravel road for another 4 miles. Ugh. Not at all what I wanted hear. My throat lets out a little groan. But at least I can handle this gravel okay.

When I each the other side where the navigator is telling me turn, I note with disappointment that the gate on this end of the road is actually closed. I’m thinking, this can’t be a good sign. That makes gate #3 that I’ve had to pass. 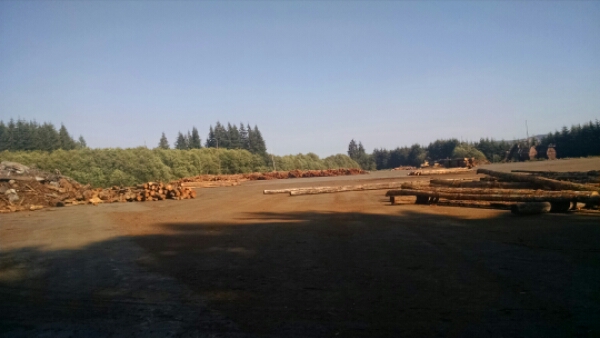 About a quarter mile past the other side, I come to this nearly empty logging lot. It stretches out like three or four football fields together in a square. And google is telling me to follow some imaginary road right through the middle of the thing. This is obviously private property at this point, and I’m thoroughly confused and disoriented. So I back track about a quarter mile, then return and wander aimlessly around the lot trying to find another road. Finally, after reaching the far side and tracing the border, I come to the gate pictured below. It was seriously hard to find. 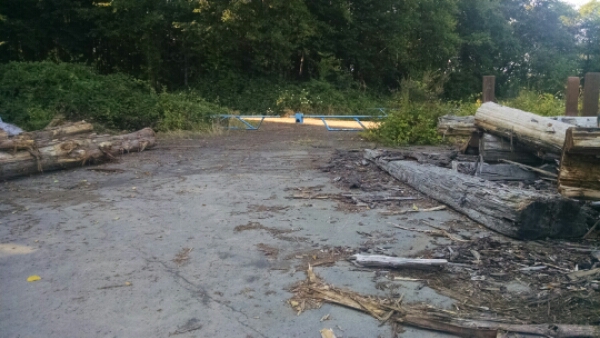 Google chimes in again, “turn left”. So, this makes gate #4 that I’ve had to circumvent. By this time, I’m so numb to it all that I just lay my bike down and drag it under the gate. No sense in offloading any of my gear for this one.

More gravel. 🙁 I swallow, trying to wet my throat. How long has it been since I ran out of water? 10 miles? 12 miles? 2 hours? I dunno, but its been too long. About a half mile to three quarters of mile, I come to this lovely thing. 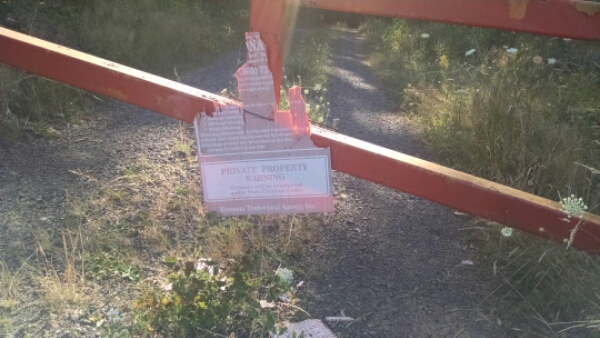 This time, it actually mentions “no trespassing” and the word prosecute. Now all the gates previous to this never said anything about no trespassing. So this is definitely a new level of disobedience if I decide to cross this gate. So I whip out the map and look at all the options. At this point, I’m looking at back tracking several miles to get out of this pickle. Or, just continue on as google is directing me and water will be in my path soon. Incidentally, I find it odd that there wasn’t a single stream back on the last 4 mile stretch of gravel. There should have been something, right?

So, this makes gate #5 that I’ve jumped (or ducked under in this case). Again I just lay the thing down and drag it under the gate.

After about a mile more of gravel road, I come to a T, which google doesn’t show on the map. So I guess that I should keep going forward as the route seems to indicate.

And now, this is where it gets really interesting. Even more so than all the other gravel roads. Suddenly I’m in a place that reminds me of hiking in Pico Canyon down in Santa Clarita (Southern California). I’m remembering these hiking trails where I had once fantasized about mountain biking down that path in Pico Canyon. Never once when I had that fantasy did I envision being on a fully loaded road bike with modest tires and no shocks. It was always with fat tires, and a cycle that could really handle the terrain. And that’s when it occurred to me that maybe Google thought I was riding a mountain bike. My mind flashed back to that NPR show where they were talking about the problem where google doesn’t consider your vehicle type, and this resulted in several large RVs getting stuck in places they shouldn’t be. Yes, that’s exactly what’s going on here. Just look at that crazy trail it sent me down. 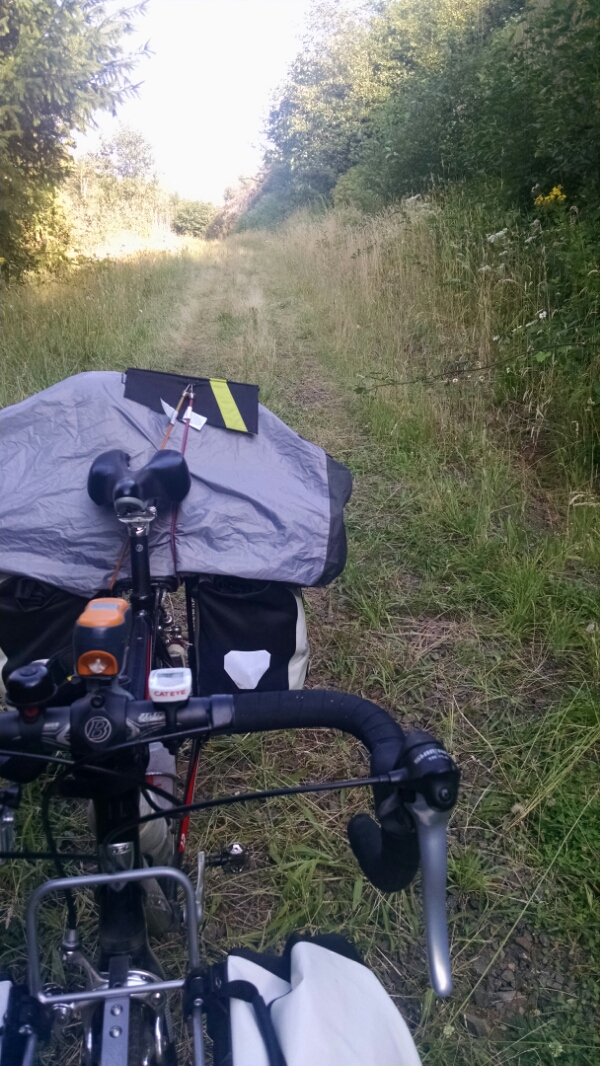 Just before this shot, my phone app “Awoken” alerted me, reminding me to check my reality to see if I was actually dreaming. I got a real chuckle out of that. Oh, if I was dreaming I’d have a bottle of water in my hands right now. And just to be sure I wasn’t dreaming, I summoned my special powers to make a full water bottle appear. Nothing happened. I was not dreaming.

Shortly after this shot, I approached a curve in the path, and google chimed in to take a left. Seriously? Take a left on this, the only possible way the path can go?

Finally, gate #6 stands before me. And on the other side? Pavement. And a hundred yards down, a house with a running sprinkler to ride my bike through. I’m tempted to go up and start drinking from the thing.

A couple more houses down there’s these 3 guys grilling on their front porch, and one of them says “hey! How ya doing?”. I respond simply with “doing good”. Which is a total lie. I’m seriously dehydrated at this point, so I only get about 100 feet before I turn around a ride back up to their house.

The second guy is like “hey! You want some fried zucchini?”. It was actually a little tempting, but I passed and just asked if they could please help me out with some water. And the first guy was like ” yeah, come on over here and I’ll set you up”.

And let me tell you, this was no standard water hose he directed me too. This thing was on a tripod, and had a drinking fountain attached to it. For all I could see, the thing looked like it was made of gold shining in the sunlight. The second guy once again offered me some fried zucchini. He was really making a good pitch for it. And I kind of wish I had taken him up on the offer. I mean, how often does a complete stranger offer you fried zucchini fresh off their grill?

Well, that’s about all I’ve got time for today. That was a pretty long post, and I’m heading off to sleep now. I’ve got some decent video I hope to soon.