Choosing between rewriting yesterdays lost post, or doing nothing.  My butt is aching, as is much of my body.  I had spent an hour writing a post for day 2, and the WordPress App lost it when I backed out. Slightly disappointing. I’m tired, but it’s difficult to sleep.  I want to get an early start so I’m not pitching my tent at 9pm again tonight.

Last night, as I finally got my tent up and hit the single shower at roughly 9:30, I found that it cost $0.50 for a shower. The cost was no big deal, but getting quarters was a problem. I ended up having to purchase two soda’s from the machine next door which were $0.75 so that I could get two quarters back. And then I was fearful the thing was going to shut off on me. I didn’t see any obvious indication of how long I got, so I was finishing through cleaning up and didn’t do a great job. It was a less than satisfying end to a rough day.

So as I set out for today’s ride at 8am, this was weighing on my mind. I had knew that day three’s campground likely didn’t have a shower and I was pondering riding a few miles to some South Bend to shower, then riding back to Bruceport. But there was still no guarantee of a shower this way. 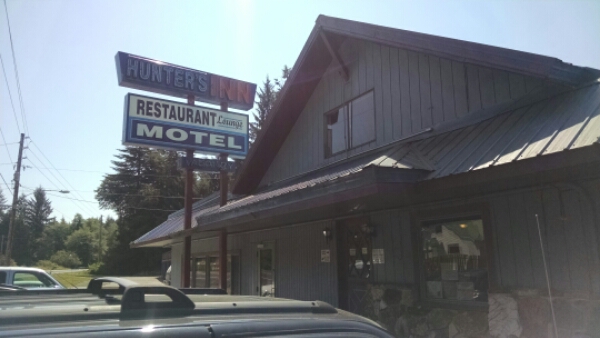 At about mile 20, I came across this place where I decided to fill my water bottles. And then I realized I could eat here too. Soo glad I stopped. Big portions and yummy food. It is the first time since leaving Portland that I’ve actually felt like I had enough to eat. 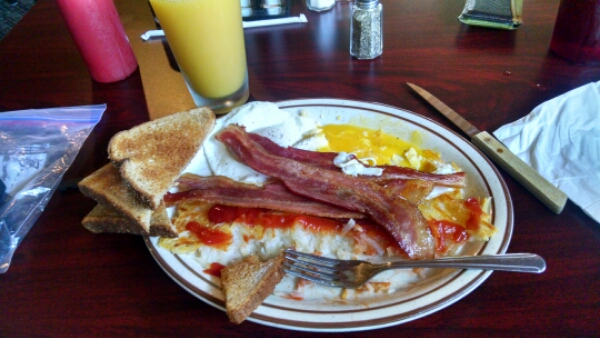 While I’m sitting there waiting for this bounty, I have a look at the map of South Bend, and with curiosity, I type in “hotel”. And up pops a nice little place with a 4.5 star customer rating. And before I realize it, I’m on the phone making a reservation for tonight. They have a shower, and WiFi. Oh I’m so looking forward to a night in a hotel now. 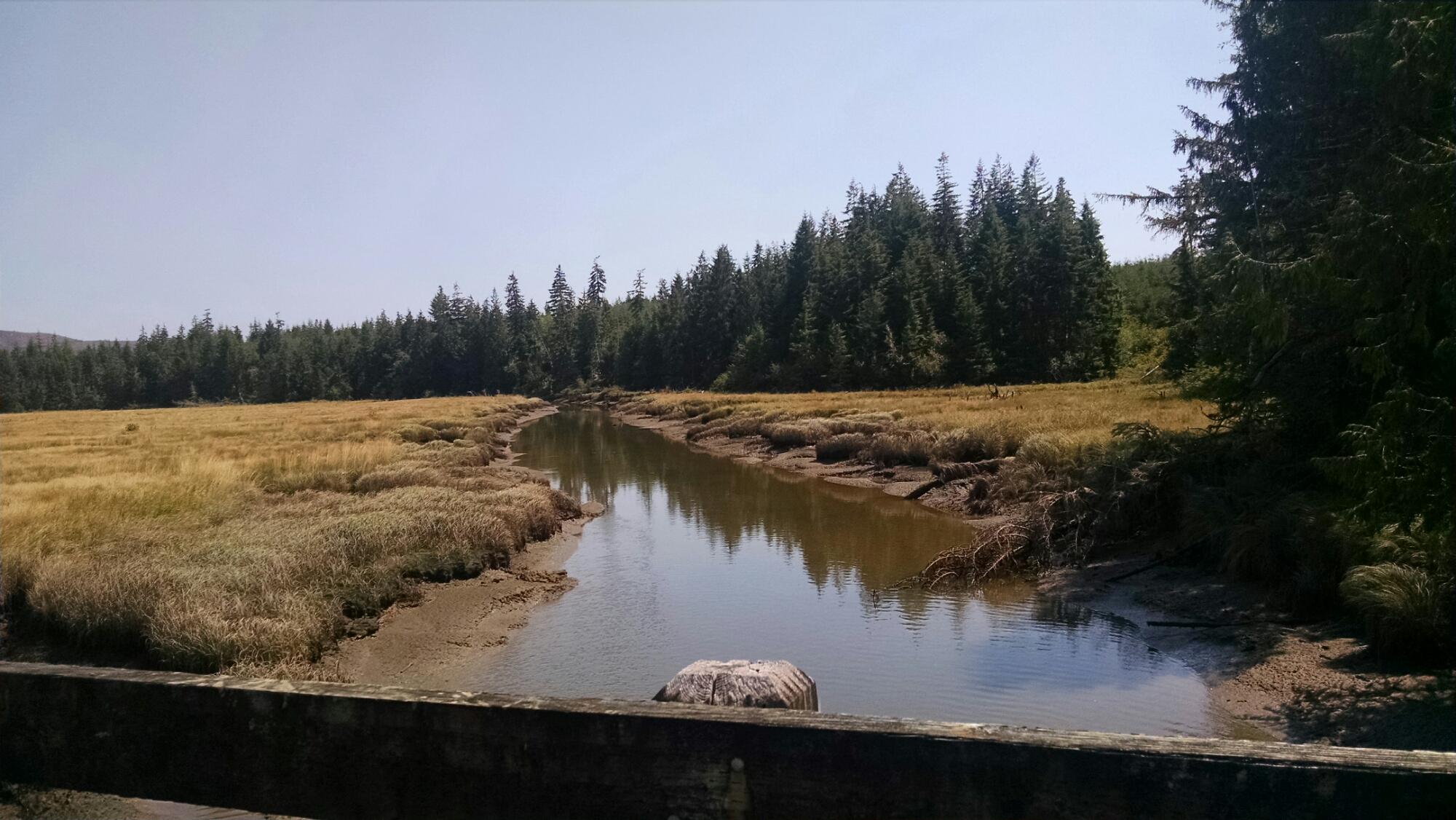 But, before I get there, google navigator has me taking another slight detour. And it’s not for a couple miles before I hit gravel again. Its a beautiful ride, and I’m running early today. And I know I’ve got a shower and hotel waiting on the other side. So this 6 miles of deserted gravel road is entirely enjoyable. 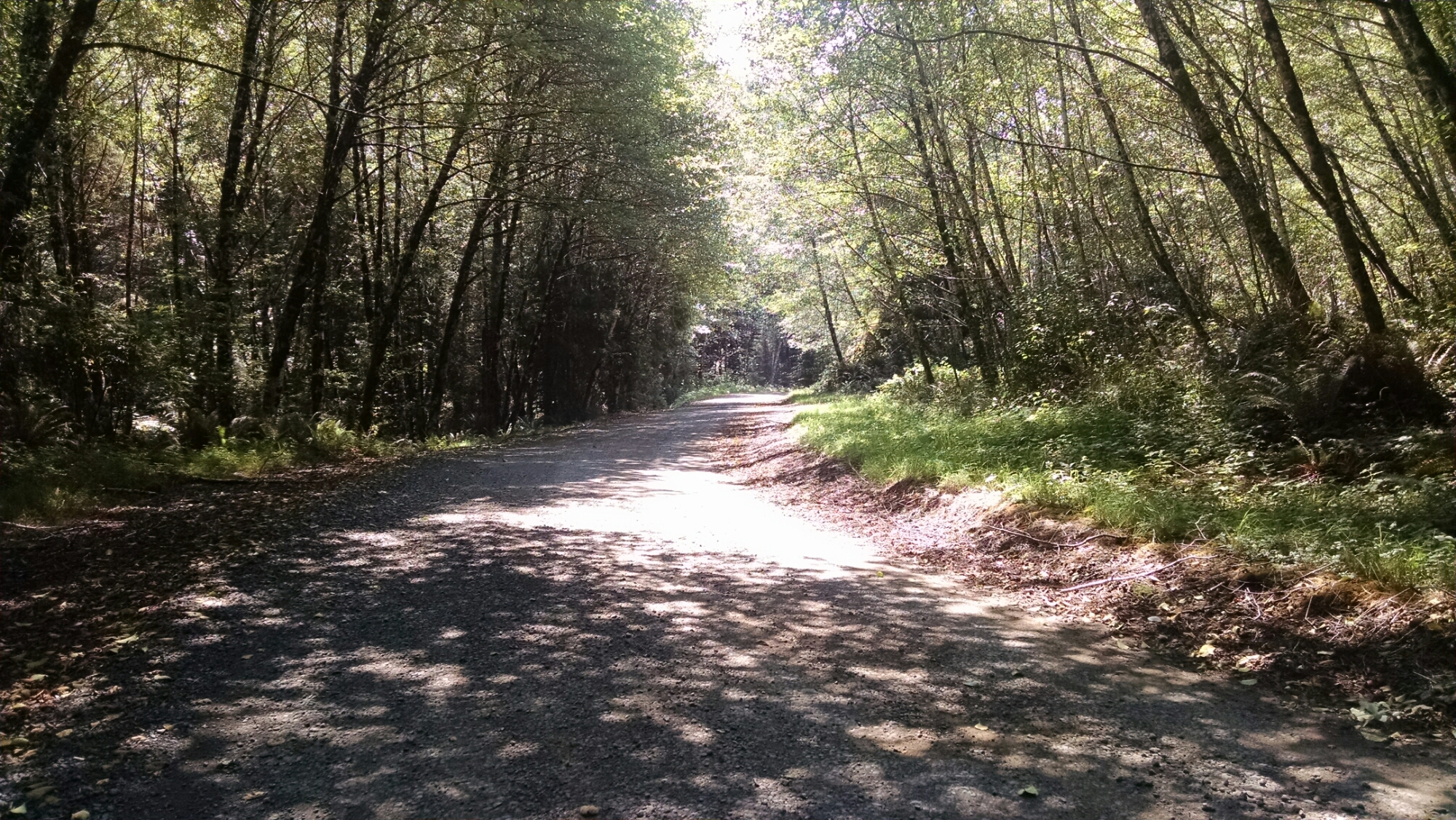 Most of it looks exactly like the picture above. There was a running stream off to the right for much of it.

When I arrive at the hotel at about 4:30, I’m a little disappointed to hear that the there is not bike shop or laundry mat in this small town. I would need to hit the next town up (Raymond) for any of those services. But the lady behind the counter offers to do my laundry for me if I just leave the bag a outside my room door. OH MY GOSH! 5 STAR’s on yelp for the Seaquest Motel in South Bend. The motel is really nice. They pay attention to all the little details. There’s a fridge and a little kitchen area. It feels like a home, and not a cheap motel room. Total recommend it if you’re ever here.

Too tired for any more pictures. I eat a burger at the local restaurant, again where they don’t serve fries. But the side salad is really yummy. A quick investigation reveals that I won’t be leaving until 8am tomorrow. Cause that’s when the coffee shop opens, as well as the local shopping mart.

Finished Day 2’s post and went off to bed. 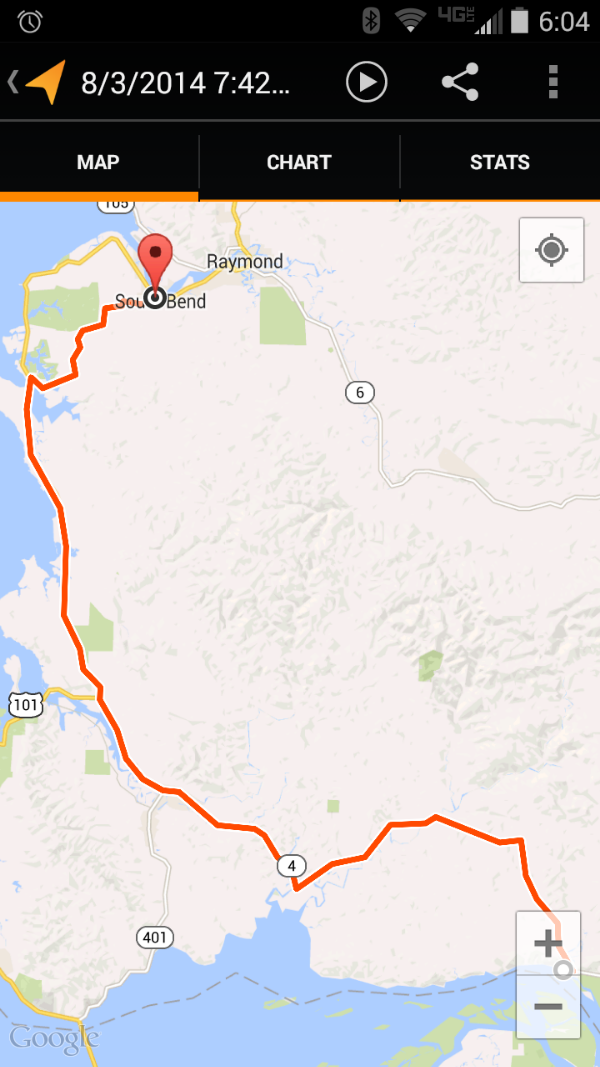 For a link to the full GPS map, click here.