Last night, I ran into a mom who said her daughter had really wanted site #71, and I had explained that if all went according to plan, that I would be gone before 8am. And as it turned out, I was gone by 7:10am. My next destination, Dungeness Recreation Area was another first come first serve campground, and was getting more and more worried about not being able to find a campsite each day.

What I didn’t realize, is that the Olympic Discovery Trail (ODT) was available as a paved option only a hundred or so feet beyond the road to Camp David Jr Rd coming out of the campground. So for at least one mile I was riding on the road when I could have been on the nice paved path.  And it wasn’t until after I hit gravel for a while that I found a way up onto the paved ODT. Though, even that was short lived. It was only a matter of a total of three or four miles before the ODT turned into a dirt and gravel hiking path.

But I must say, this is *exactly* the kind of path I was hoping for when I had originally planned to hit the Pacific Northwest Trail. It was not meant for road biking for sure, but I managed just fine. There was not a single soul on the approximate five mile stretch from the end of Camp David Jr Rd to the north east side of the lake. Posting a lot of pictures from this section because it’s one of the most beautiful sections of my entire 10 day epic adventure. 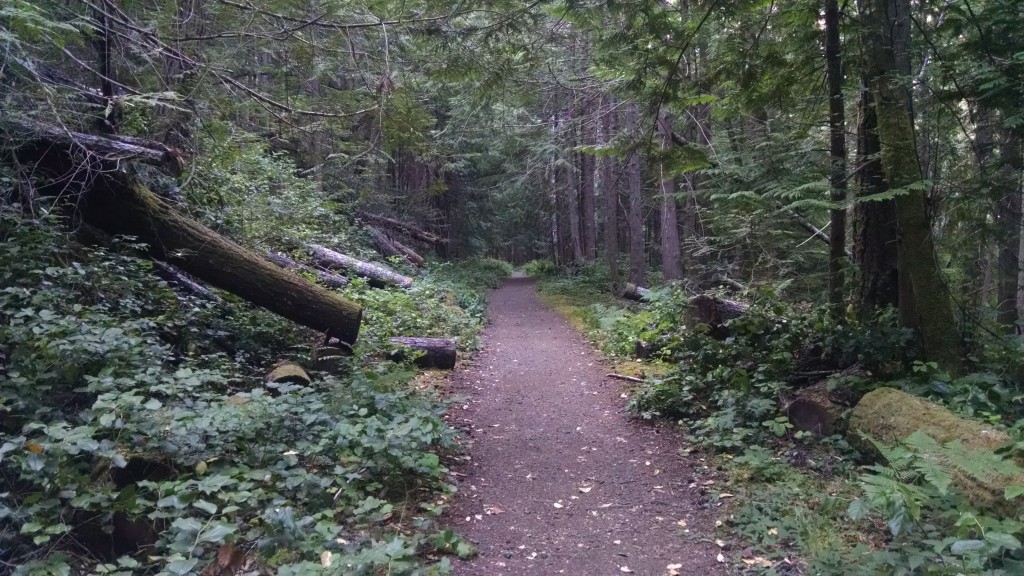 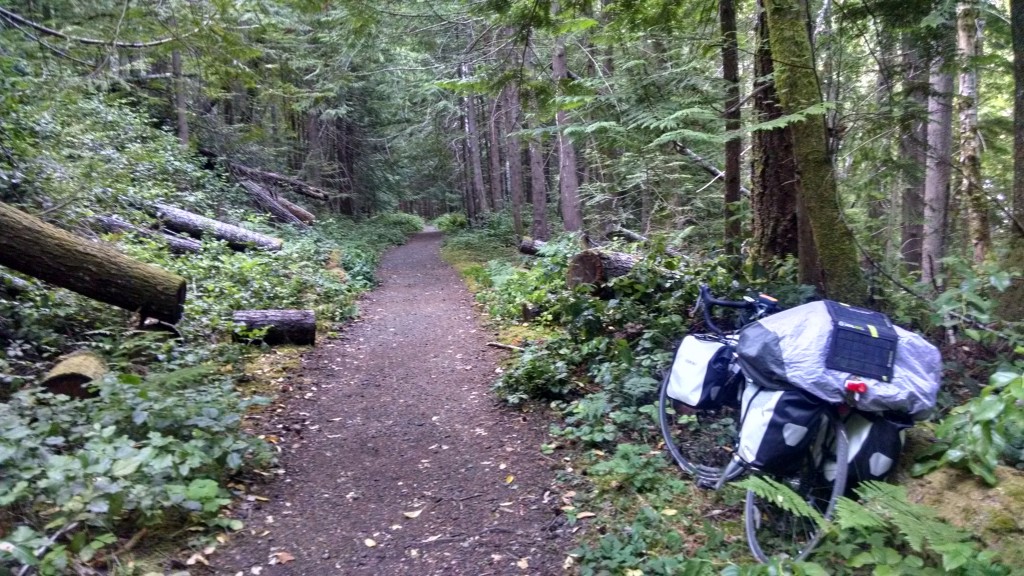 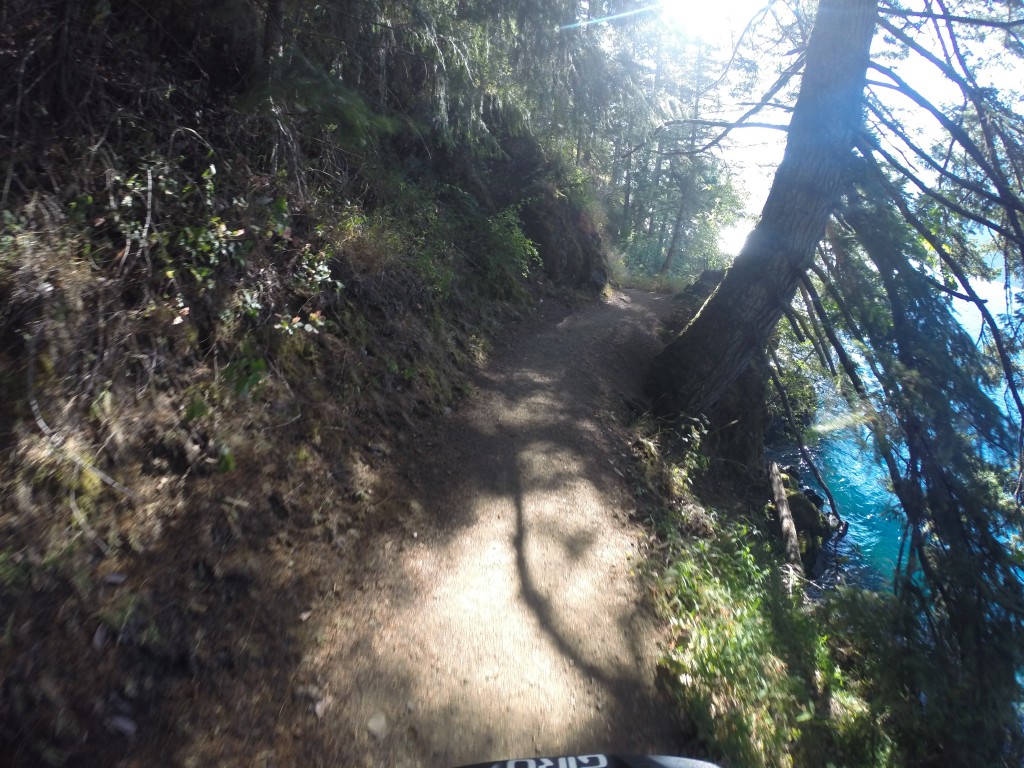 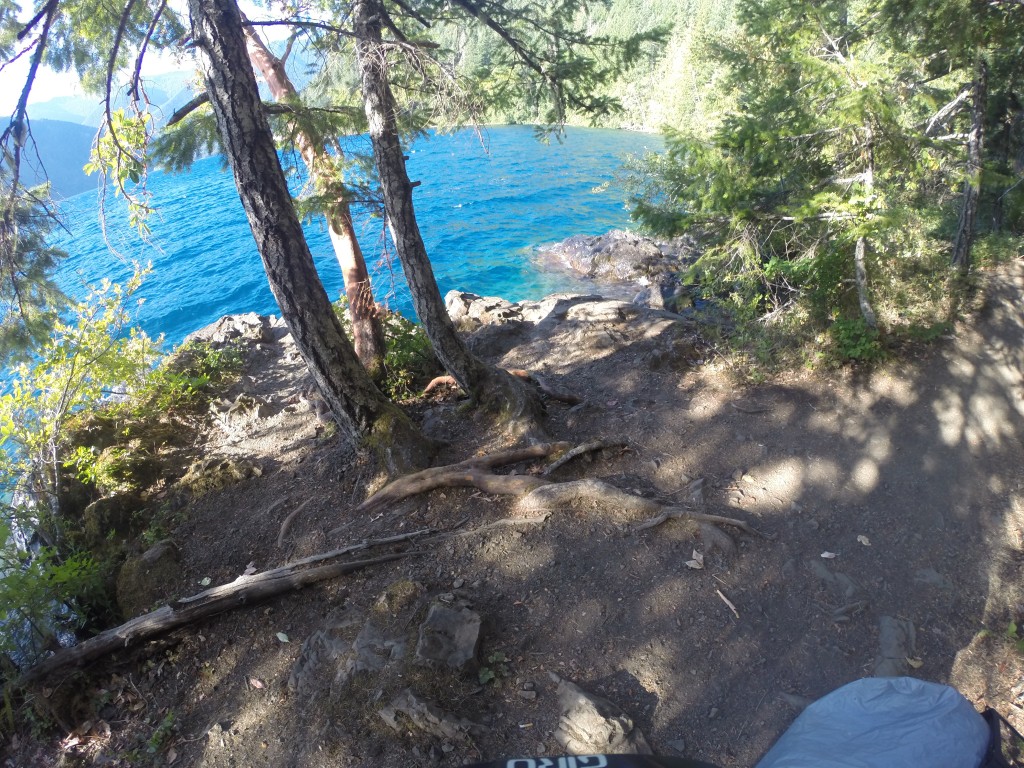 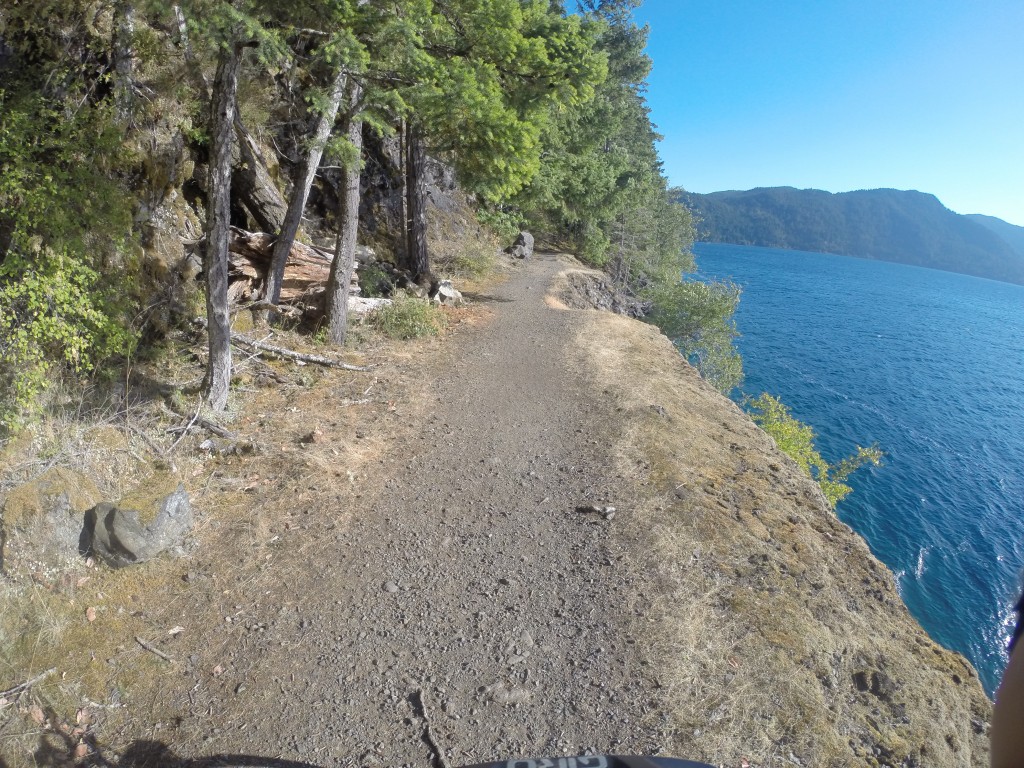 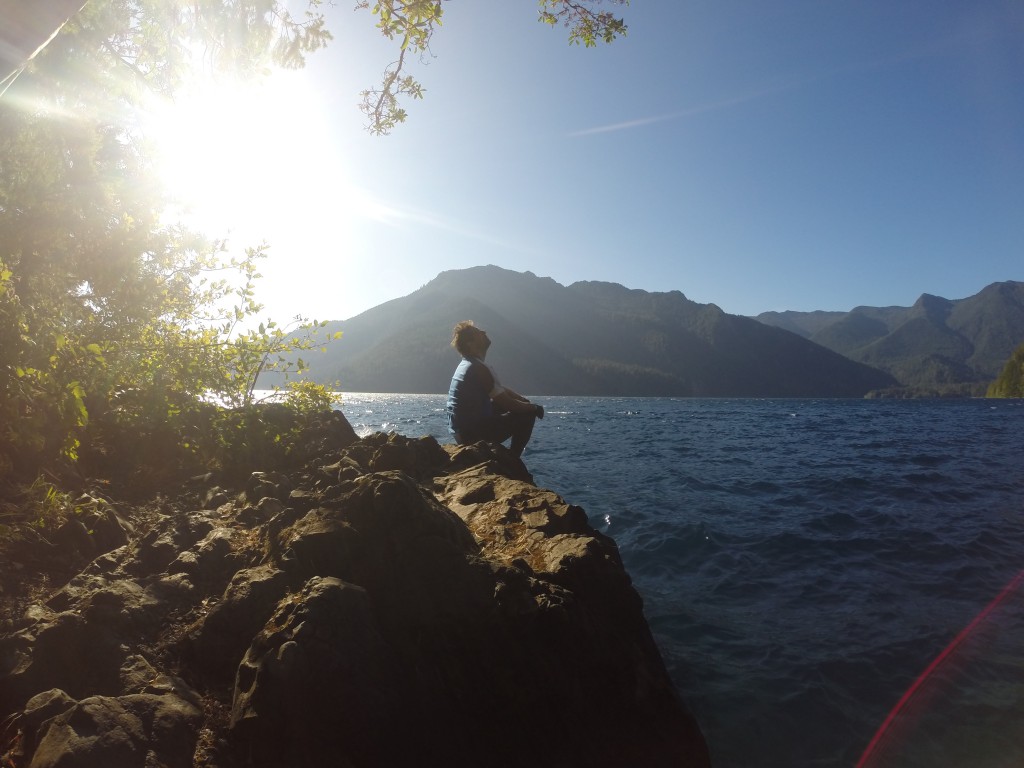 And, as I reached the far side of the lake, I came to road closed sign that was reminiscent of day two of my ride. So I had to the make the choice. Do I return back five miles the way I came from? Or do I once again ignore the closed sign and just get through this latest road block. 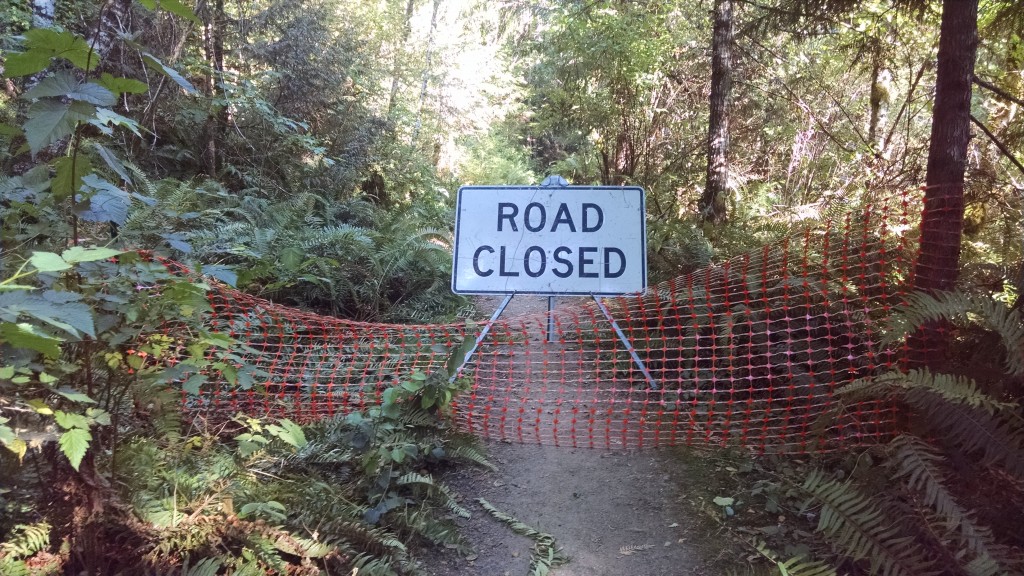 It looks like the government may be considering paving this entire stretch of ODT on the north side of Lake Crescent. Because as I moved a few hundred feet past this closed sign, I came upon bulldozers and workers making the path wider. It was a little disappointing to think that they might replace this wonderful dirt and gravel path with pavement. It was just such a beautiful stretch the way it already was.

As I exited the path into the laboring dozers and workers, one of the workers joked out loud “Oh, we need to arrest this guy”.  But then of course he lead me through the rest of the way and got the dozers to stop so I could pass back on the paved road that would continue my trek for the day.

A few miles, maybe four or five, after emerging onto the roads, I come to the 112 highway, and stop for breakfast at the Blackberry Cafe to fuel up my body, and charge my phone and batteries. Before leaving, a local cyclist stops on in and chats with me for a while. And this turns out to be very good, as he explains that coming up shortly is a bridge where I should take care to go “underneath” to the biking/walking path that is the ODT. He noted that my GPS map seemed to miss that little portion of the ODT if I had simply followed my GPS map. And indeed I did ride straight across the bridge and missed the underneath bridge. I had to turn around and cross back over to get to the ODT portion of the trail I would have missed. Here’s a couple of pictures of the section I would have missed. 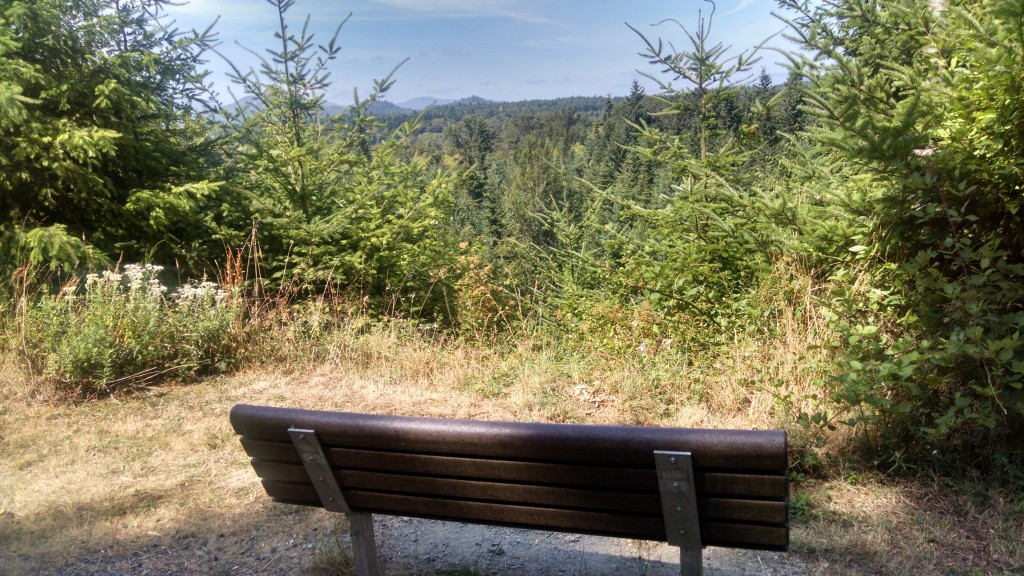 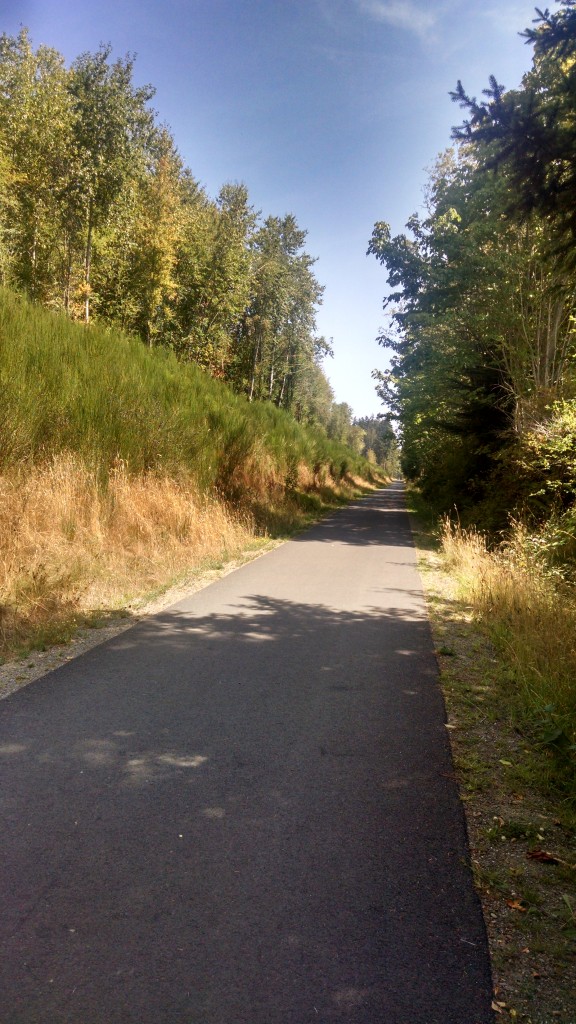 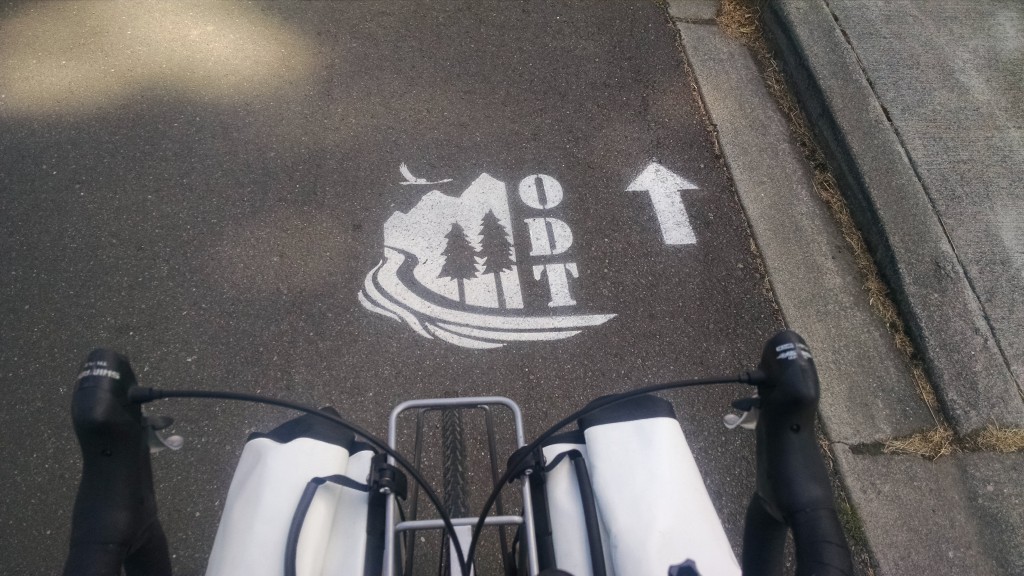 After reaching my destination for the day, and grabbing the ONLY site (#25) left of all the first come first serve basis sites, and after setting up my tent and getting ready to go and pay, a camp worker stops by to explain that there are walk-in sites that are reserved ONLY for those backpacking and those on bikes. So I’m packing up my stuff again and moving. This moving after setting up seems to be a recurring thing on this trip as I’m hastily setting up my camp each evening to ensure that I at last have a spot. But I’m thankful to save a good $15 by moving the $7 walk-in/hike-in site. I find that I’m total secluded from all the other campers out at the very edge beyond site #43 on the second loop.

This campground does have showers, but they cost $0.25 for each two minutes. And if you don’t have quarters with you, good luck trying to find any with the camp hosts, who seem to a bit like volunteers who only do certain tasks, but not all tasks, as the camp hosts. This is my first shower after three evenings with none, and it is very welcome.

After getting camp setup, my phone is down below 30% power, and I know that when it reaches 20% it drops really fast and only has about 10 minutes of usage left. So I’m struggling to find a place to stay for tomorrow night, my last night that gets me over to the Amtrak at Edmonds station early in the morning on Sunday the 10th, which is where I’m planning to jump on the train back to Portland. After failing to find any vacancies on either side of the sound, I’ve finally settled on a hotel that is about 5 miles east of Edmonds Station and make a reservation. And then, not two minutes later, I’m realizing that the Amtrak is sold out for Portland as a destination until Tuesday. So now I’m disappointed that my plan to ride the Amtrak back to Portland is falling through, and I may have to once again rely on someone (Bev) driving all the way up to Seattle to pick my ass up. This just seems so ridiculous to waste such a trip and a day when the Amtrak is so close. But I call the hotel and cancel my reservation for tomorrow as it’s obviously a lost cause.

While I’m not exactly excited about the prospect of riding nearly 70 miles to the Bainbridge ferry before getting across to Seattle, I quickly reserve the seat on the Amtrak out of fear I might lose the opportunity. And then I spend another 15 minutes trying book a hotel on Bainbridge Island close the ferry, only to find that everything on the island is pretty much booked at this time of the year.  And the closest reasonably priced hotel near downtown Seattle is at least 11 miles away from the station.

My phone is dying and nearly out of power. I’m down to 1%.  So I shut it off and give up for the evening.  Not knowing exactly where I’m going to stay the night before I get on the Amtrak. Not knowing how far I’ll be riding tomorrow, or even where exactly I’m riding to. All I know is that I’ll be heading toward Bainbridge Island somewhere close the ferry so I can plan to get across to downtown Seattle at some point.

Before sleep, I hook my phone up to the solar battery pack, my last charging option available, which will get me about 50% powered for when I wake up in the morning.  A little bit of a comforting thought. 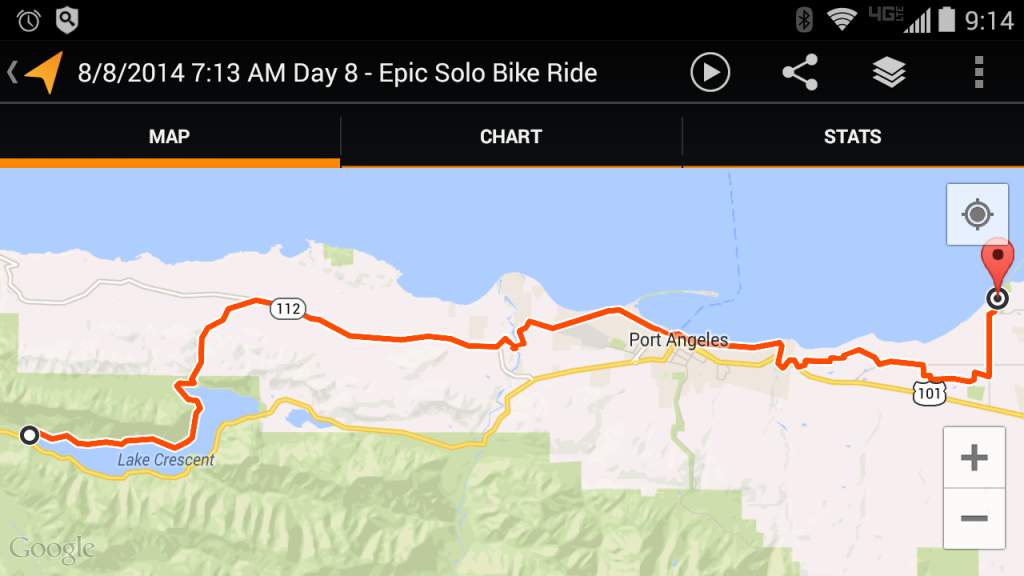