In love with bicycling 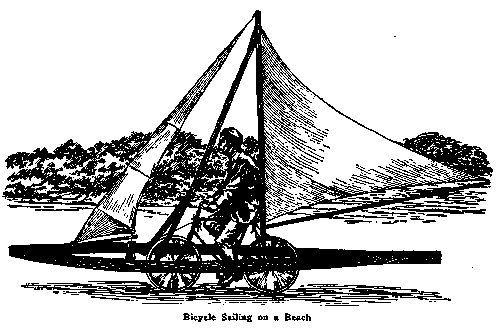 “You’re not in love with sailing.  You’re in love with the idea of sailing”.  That’s the line I remember so clearly from a movie, though I can’t recall the movie I heard it in.  I think it was a Kevin Bacon movie. It felt like the character was speaking directly to me when I heard it, because that’s exactly how I feel to this day.

I grew up on commercial fishing boats for much of my young life. I loved being out on the open water, bouncing around and riding the waves. I especially enjoyed standing on the bow of the boat and watching the porpoises speed along and play in the wake like mini orcas surfing along. Sometimes I would imagine they were looking up at me and inviting me to join them in their play. I wondered how that would feel to be speeding along beside them.

Though I hadn’t spent any time on actual sailboats growing up, I’ve always held them up as this romantic idea in my mind. The idea of the wind pulling me along for a ride is something I’ve been in love with since a child. The concept that you could have some level of control over your direction and speed, and yet also be at the mercy of mother nature has lived inside me for years. As I’ve never taken any serious action to become a sailboat captain or join a crew, it does indeed appear that I’m in love with the idea of sailing, and not the actual act of sailing.

There is however, a similar act that I am equally in love with. The act of climbing on my bicycle and riding off into whatever direction my heart feels compelled to take me. The moment I lift my feet off the ground and direct them to the pedals, it feels like I’m taking off into the air like a bird. Have you ever sat looking off the edge of a cliff, watching the birds take flight over the vast openness? Have you ever wondered what it would feel like to be able to soar through the air like that, being supported by the wind flowing under your wings? The bird cannot control the wind. The bird is powerless to make the wind do anything. And yet, the bird has the ability to ride it and set a course for itself. The bird and the wind are in beautiful concert together, playing out some unknown song that begs to be heard. When I set off on my bicycle, that is how I imagine the bird feels as it floats on the wind high above the ground.

If you ever pass me by on a bike ride and you see tears in my eyes. Those are likely not tears of sadness, but tears of joy. Tears, brought on by a state of euphoria that often overtakes me at some point during the ride.