This morning I awoke to condensation in my tent, and on my bike. Not much protection at this campsite from coastal elements.  Got everything packed up and hit the road to the local market and coffee shop at 7:21am. 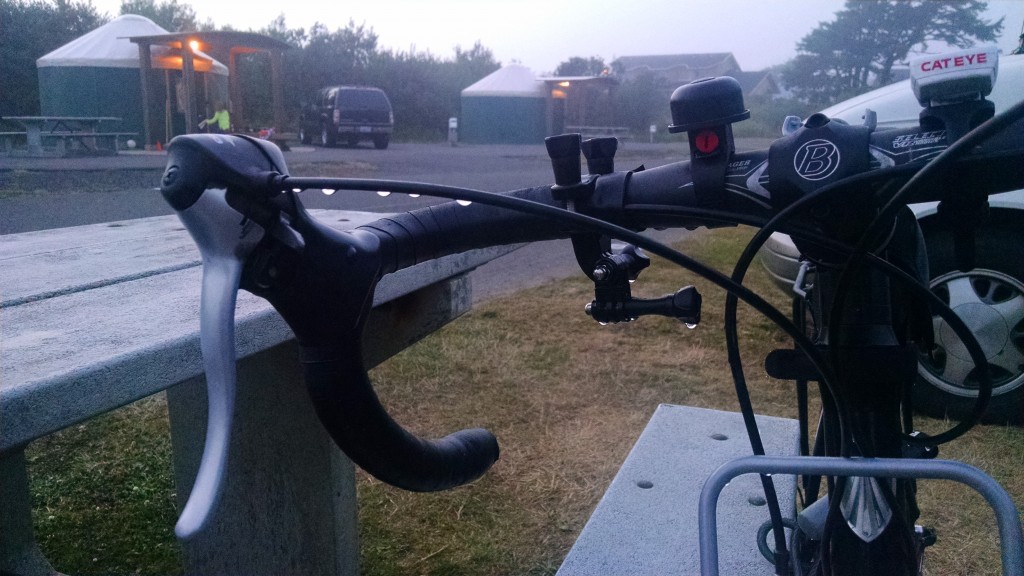 About three or four blocks up is “The Best Coffee On The Beach”.  Well, that’s what it says on the sign anyway. 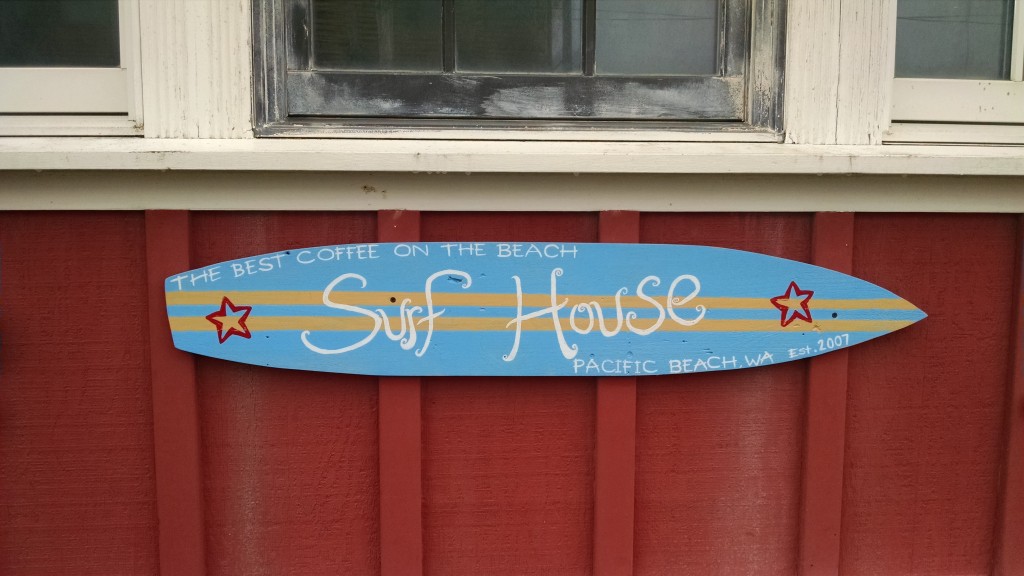 This is where I stock up on a couple extra bottles of water, and have a couple of those really cheap, not very good, breakfast sandwiches with sausage in them.  They’re okay, and do in a pinch, but they’re just not that great.

This is also where several people see my loaded bike and start asking questions about my trip and my plans. Where are you coming from? Where are you going to? How long have you been on the road?  And one cute young woman with short hair and a nose piercing gets pretty specific with me about my planned path north into the Quinault Indian Reservation. She explains that she works for the Natural Resources Department on the reservation. According to her, the pavement ends a bit earlier than I had thought, and she is also advocating for me NOT riding through the reservation roads as I have planned. She doesn’t outright say don’t do it, but she says she’s not sure it’s a good idea for various reasons. The primary reason being that the roads are not meant for bikes, and that they are not clearly marked. It will be easy to get lost, and no one will know to come looking for me if I do get lost.

I explain that I’m on an adventure, and that I’ve got supplies to last a few days if I do get lost. And that hey, “It can’t be any worse than day 2 of my trip.”. She laughs at this and says, “okay, just be careful.  And have fun.” 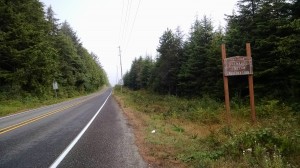 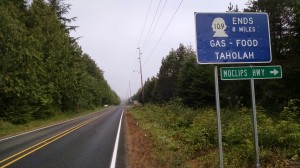 About two and half miles north, I must make the decision to follow the advice of the short haired woman and take the Moclips highway over to the 101, or continue north to the unmarked logging roads on the reservation. But the decision was already made before I left the coffee shop. So I continue north toward the small town of Taholah, 8 miles ahead.

I pass a “Jesus” bus on the way in, which passes me and beats me to Taholah. And the driver greets me as I enter Taholah with a smile and a “Hey there biker dude”. As I enter the town, I see dogs running around the streets with no leashes or collars on, and young children picking berries on the side of the road unsupervised by anyone. Several of the yards in this place I would call a village are littered with kids toys and play structures and broken down cars and various other debris.

I arrive at the local mercantile store that sits on the road of the Quinalt River. And this place is hopping with native american’s. I’m probably the whitest person at this store. But most are chatting with perfect English, while others remind me of the Alaska Natives in my home town in Kodiak Alaska with the heavy accent of their native tongue. I count at least 20 people in this little store all chatting like they all know each other, and I’m further reminded of Kodiak Alaska where so many people know each other. 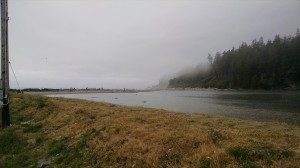 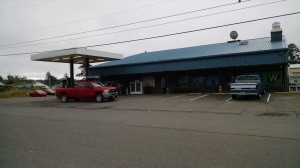 One of the heavy accented elders sits next to me as I’m packing up food and water and is asking about my plans north. He says that he hasn’t been up north of the river in years, but he’s recently seen bulldozers and plows heading that way. And by recent, he means several years ago. He recalls hearing that they were widening the logging roads or something, and that perhaps it won’t be such a difficult ride for me.

Before leaving Taholah, I decided to refresh my navigation app to see how many miles I have to go before reaching Kalaloch Campground.  In retrospect, that was a bad idea. For as long as I kept the screen up with the path marked on the map, I could zoom in and out, seeing my current location and seeing if I was on the correct path. But because there was spotty reception, instead of seeing my desired path through the reservation, I’m presented with this little beauty. 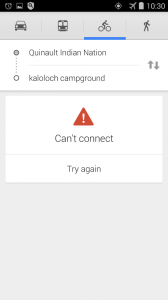 Thankfully I was able to get a connection in Taholah that enabled me to get my navigation map and path back on the screen. And I committed to leaving it alone for the entire time I was on the gravel logging access roads. I get the feeling that without this navigation map, there was a good chance of getting lost on the unmarked roads north of Taholah in the Quinalt Indian Reservation. There were at least four or five times that I consulted my smart phone navigator to see which way I should be going. There were potential wrong choices to be made on this multi-mile stretch of access roads where there was no help to be found.

The pictures below illustrate the conditions and danger of this stretch of the trip. The sign indicating the way to the 101 was my last chance to take a “more traveled” path. I believe that sign indicated the way that the logging trucks currently took, whereas the way I took was onto roads that were only used by a few locals who lived out in the middle of nowhere. 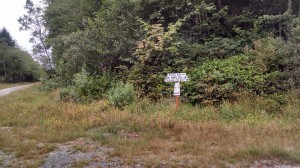 At the first turn, I decided to mark the turn with some rocks and an arrow, just in case I ended up having to back track, and lost my navigator somehow. 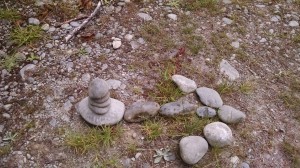 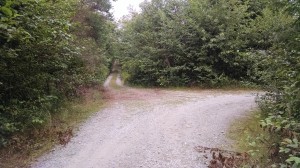 After this first turn, I’m feeling plenty comfortable that my navigator app will get me through these old roads. So I’m relaxed and enjoying the ride in complete seclusion. 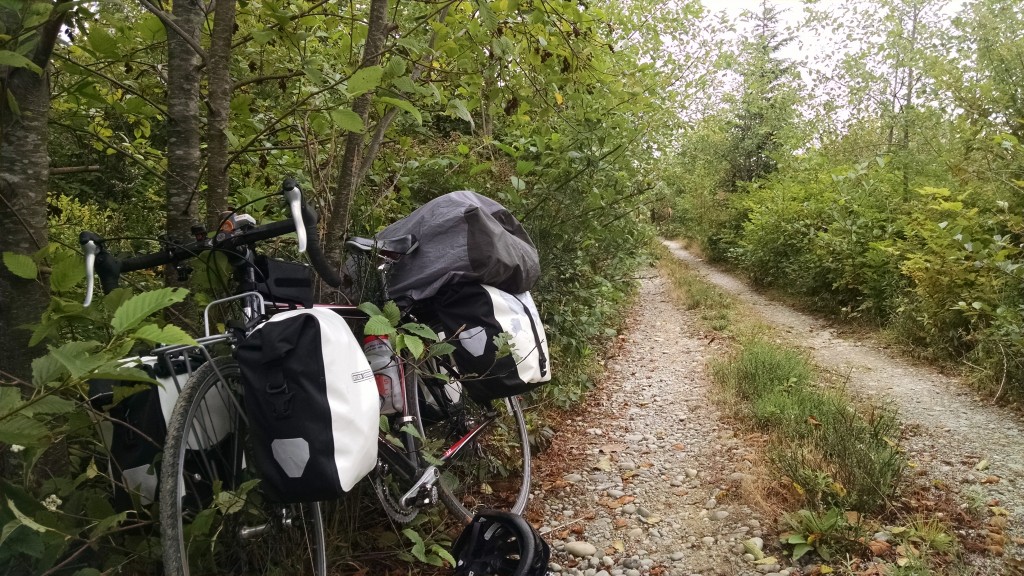 A few times, I heard the elder native american from Taholah in my head, reminding me to watch the side of the path for bears.  There were several piles of bear dropping throughout this section of path.

On this extremely rocky path at points, my average speed was dropping down to about 4 miles per hour. But I made it through without a single flat. Just completely amazing and wonderful. 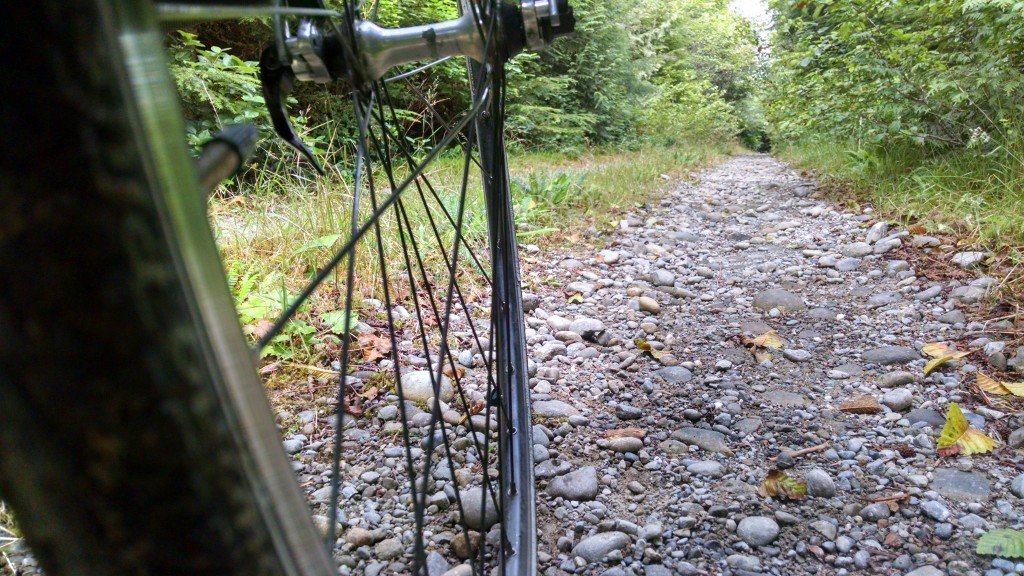 There were several really beautiful bridges on this section of the path. 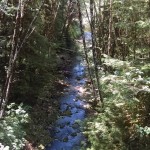 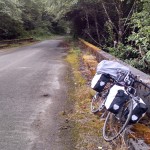 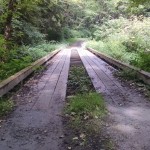 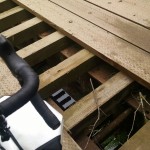 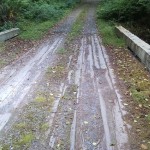 When I finally reach the 101 and pavement, I have his odd urge to reach over my left shoulder and grab my seat belt to buckle up. As if suddenly I’m going to be going really fast. And the thought for safety is not unfounded, as for a mile or two throughout the rest of the day, there are a few sections where is no shoulder to ride on. There are semi trucks and RV’s passing really close, and their wind makes me feel unstable and insecure. I almost want to be back on the gravel roads. “Almost”. 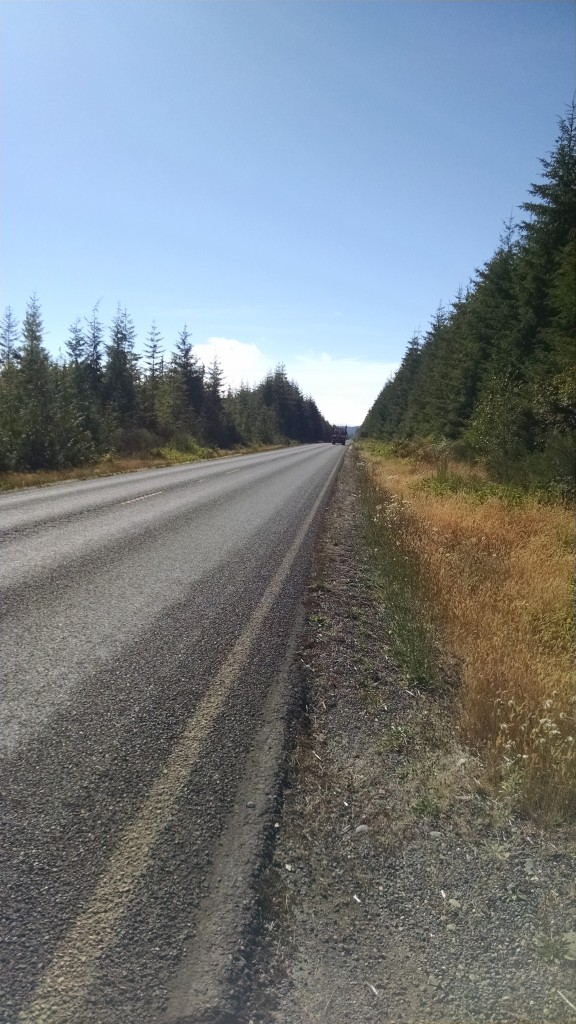 Kalaloch Campground is a really nice place for camping. All of the campsites, while close together, are separated and covered with large trees. It just feels really pleasant. This is the only National Park in the Olympic Peninsula where a reservation is required, and absolutely recommend doing so. I watched as a few cyclists were turned way from camping where I was gladly accepted with my reservation. There are no showers however, unless you decided to stay at the Kalaloch Lodge.

Today, I ended this trip with a wonderful desert from the lodge restaurant. Yummy! 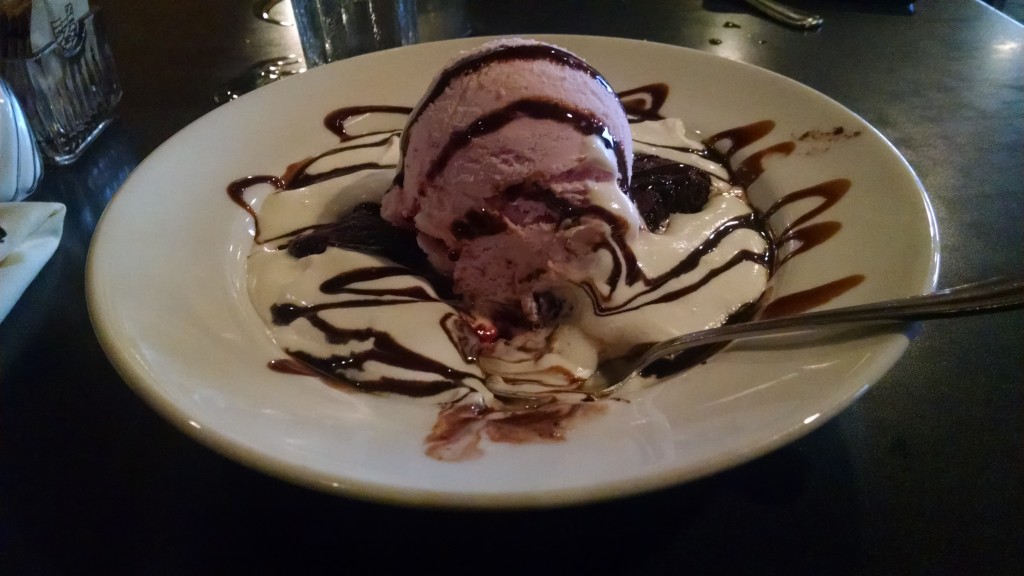 After today’s ride, I’m no longer worried about anything ahead. I’ve been through some pretty difficult and uncertain situations for both day two and day five. I’ve now been through enough to feel that everything is simply going to be fine no matter where I end up. I’ve got spare water bottles, which I’ve now made use of and have had plenty more to spare. Also, I’ve picked up water tablets at the market at the Kalaloch lodge. If find myself out of water, I can use the pills to clear up creek water in a worst case scenario. Oh, and I’ve also picked up a bear whistle here.

Here was my path for today. Don’t be fooled by the 4.5 hour estimate.Total ride time was nearly 8 hours, and total elapsed road time was just over 11 hours for this day. 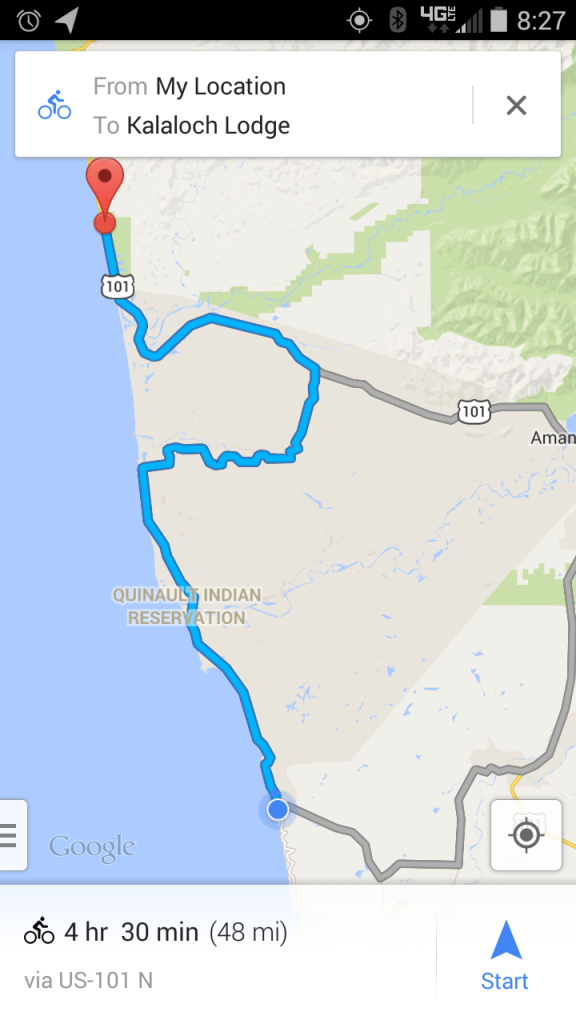 Link to the raw GPS map can be found here.